The Chaldean flag is a design of the 20th century, like the flags of other Christian groups from the Middle East.

However, its design is based on symbols that represent an age-old history.

The first designs have been made since 1985 by Amer Fatuhi, Chaldean artist and historian.

The last and final design by Amer Fatuhi was officially approved in 1999 by the ICA (International Chaldean Artists Association).

All Chaldean organizations worldwide have adopted this flag as a representation of the Chaldean nation.

Meaning of the flag 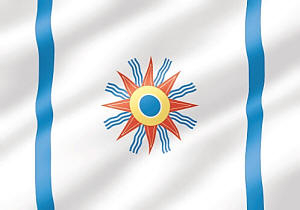 The two blue lines represent the eternal rivers Euphrates and Tigris, which rise in the north and flow towards the south of the Mesopotamian land (= Beth Nahrin).

The eightfold star represents the Babylonian symbol of ‘law and justice’. This star is designed in Chaldeo-Babylonian style, dating from 4100 BC. 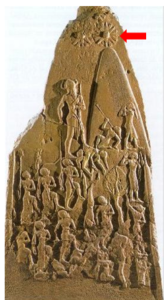 This symbolic star is also depicted on the obelisk of King Naram-Sin, king of Akkad and grandson of Sargon van Akkad.

The two internal circles, in yellow (sun) and blue (moon), refer to the cultural contributions of the Chaldeans to human history, such as astronomy and mathematics.

Every year on the 17th of May, Chaldeans worldwide celebrate the Chaldean flag day. This date was chosen in honour of Nabopolassar (father of Nebuchadnezzar), a Chaldean king who had liberated Babylon on May 17, 626 BC and later claimed the throne.